When should prophylactic Laser Peripheral Iridotomy be performed in Primary Angle Closure? 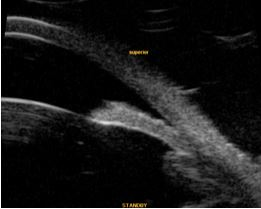 Fig. 1 UBM in dark conditions, where iridotrabecularar
apposition in a case of PACG can be observed.

LI is the standard first-line treatment for ocular hypertension or primary angle closure glaucoma (PAC/PACG) (Figure 2), having replaced surgical iridectomy at the end of the 1970s3,4.
However, the results of EAGLE study have recently demonstrated greater efficacy⁵ and better quality of life of transparent lens extraction surgery versus conventional treatment (iridotomy followed by medical therapy), in subjects with 50 or more years. The authors concluded there is strong evidence to consider this procedure as first line in these situations. 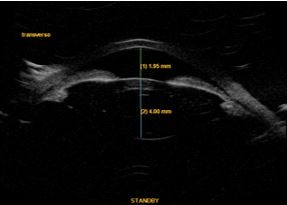 The first iridotomy attempts using irradiating energy in human irises date back to 1956, when Meyer-Schwickerath tested a xenon coagulator to perforate the iris. Frequent iridotomy scarring, as well as corneal and lens injury, have prevented its widespread use². With the introduction of the argon laser and later of the Nd:YAG laser, LI became a routine outpatient procedure.

LI reverts pupillary block by allowing aqueous humor bypass to reach the pupil. By eliminating the pressure gradient between posterior and anterior chambers, LI flattens the iris with the purpose of opening the angle, reducing intraocular pressure (IOP), and preventing or treating an acute angle closure crisis. It is also expected that, by reverting the appositional component of angle closure, it will avoid the formation or progression of synechiae and progression to chronic PACG (primary angle-closure glaucoma)1,3,4.

LI can therefore be considered in two ways: therapeutic and prophylactic. Pupillary block reversibility in acute crisis and in chronic cases with a reduction in IOP are the therapeutic goals of LI.

Its prophylactic use is intended to avoid angle closure crises and progression to closed-angle glaucoma in anatomically or physiologically predisposed eyes. Therefore, LI treatment is recommended in:

– Adelphic eyes in cases with PACG in non-pseudophakic eyes1.

– The indication of prophylactic treatment in primary angle closure suspects (PACs) is currently under discussion (Figure 3).

Such cases are a classical presentation of a so-called occludable (narrow) angle, in which the posterior trabecular meshwork cannot be observed, usually pigmented in at least three quadrants (270º), but with no ocular hypertension nor presence of anterior synechiae⁷.

Currently, the literature⁸ is consensual in using less restrictive classification criteria, whereby  those characteristics in at least 2 quadrants/180º are considered.

Although post-iridotomy angle opening was confirmed by gonioscopy or ultrasound biomicroscopy (UBM) in most cases,9,10,11 scientific evidence to systematically recommend LPI in all subjects is still lacking. Indeed, populational studies (Wang N, 2002) (Alsbirk PH, 1994) quoted by Wang B. suggested that only a small portion of patients in this situation have progressed to PACG12. 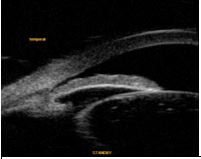 A study conducted in 201213 suggests a low risk of IOP increase in these cases (1.27% with≥ 8 mmHg and 0.64% with acute crisis), in Asian subjects, correlating with previous higher IOP values and narrower or more closed angles.

Furthermore, the procedure may not be effective in opening the angle in a significant percentage of the cases (20-60%), depending on the mechanism of angle closure, the observation method and potential ethnic factors10,14.

Recommendation of a prophylactic treatment in a wide population requires strong evidence that the benefits outweigh the damages15.

For that purpose, a prospective, randomized controlled trial was conducted in 2008 in China — the ZAP study (Zongshan Angle Closure Prevention Trial), which aimed at assessing efficacy and safety of the procedure in primary angle closure suspects (PACs) to avoid PAC progression or acute crises16.

Published results on safety showed an IOP increase (≥ 8 mmHg) one hour after treatment in 9.8% of the cases, in 0.82% after two weeks and a clinically significant (≥ 30 mmHg) increase in just 0.54% of the subjects, who normalized two hours after additional medical therapy. These effects correlated with the use of higher laser energy and a shallower anterior chamber, leading to the conclusion that it is a safe procedure15.

The follow-up study of visual complications 18 months later17 did not detect either a higher incidence of visual symptoms (glare, shadows, ghost images, etc.) or lower visual acuity compared to the control group. It can be concluded that the risk is low in this field, although a potential cataractogenic effect is still under study. Moreover a 6-year longitudinal study in an Indian population has found a higher risk of cataract progression after prophylactic LPI in such cases18.

The results of the longitudinal study19 (18 months) of angle configuration changes confirm the efficacy of iridotomy in angle opening as assessed by gonioscopy, as well as in the quantitative parameters of anterior segment optical coherence tomography (AS-OCT). This effect remains stable for 6 months, progressively decreasing until the 18th month. Nonetheless, the lower iris convexity is maintained, indicating elimination of pupillary block. The trend towards progressive angle closure is, however, lower in treated versus non-treated eyes, which could be attributed to a higher lens vault.

The technique can be found in the literature8.

In general, locating the laser on the peripheral iris, at the base of a crypt, between 11 and 13 o'clock, is recommended to avoid visual symptoms (glare/diplopy). Avoiding the arcus senilis helps laser focusing and penetration.

In thick or dark irises (Asians, Africans and some Caucasians), a combined or sequential treatment is recommended, starting with argon to decrease iris thickness and for previous coagulation and finalizing the penetration with Nd:YAG for higher efficacy and fewer complications1,20.

– Localized opacifications of the lens/cataract progression