What is the role of Argon Laser Peripheral Iridoplasty in Primary Angle Closure?

Argon laser peripheral iridoplasty (ALPI) is a treatment intended to open the apositional closure of chamber angle in cases where laser idirotomy (LI) cannot be carried out or was not effective¹. The first case includes acute angle closure situations, whereas non-pupillary block mechanisms predominate in the second 1,2,3 (Figure 1). The procedure involves the application of contraction pulses at the extreme periphery of the iris to retract it and pull the trabecular meshwork away². 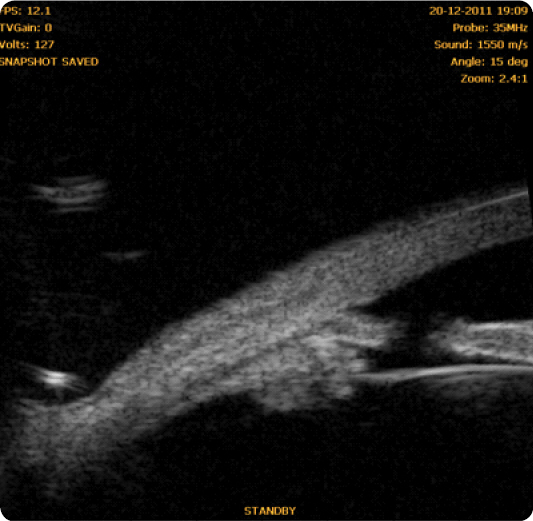 The first attempt to use laser energy at the iris periphery was conducted by Krasnov in 1977. Current iridoplasty is based on the method described by Kimbrough in 1979, in which he applied laser impacts/burns in 360º of the peripheral iris using a gonioscopy lens. He named this method gonioplasty. At the time, laser parameters caused a more penetrating burn and were not as effective in iris contraction³.

Argon laser peripheral iridoplasty should be considered as an adjuvant therapy in angle closure glaucoma, and does not replace laser iridotomy as the first-line treatment of pupillary block⁴.

The potential indications for iridoplasty involve identifying several gonioscopic aspects, as well as being familiar with and recognizing mechanisms or anatomical causes of angle closure³.

When inflammation, corneal clouding and very shallow or flattened anterior chamber preclude LI, iridoplasty has proven effective in reversing the attack by opening the angle in areas without peripheral anterior synechiae (PAS). This allows intraocular pressure (IOP) control and clinical improvement until LI can be carried out to eliminate pupillary block³.

ALPI can be performed when the crisis was not responsive to medical therapy or as a first approach with or without previous topical and/or medical therapy. A randomized clinical trial conducted in 2002 comparing the efficacy of first intention iridoplasty (after topical therapy) versus systemic therapy showed a faster decrease in IOP in the first case, with significant differences at 15, 30 and 60 minutes⁵.

If a patent LI to eliminate pupillary block is not enough to open the angle and there are no extensive peripheral anterior synechiae to justify this, a residual apositional closure caused by non-pupillary block mechanisms is present. The causes that most often have been described are, in anatomical order:

In 1940, Gradle and Sugar first observed deep central anterior chamber in eyes with angle closure⁶. In 1958, Tornquist was the first to use the term “plateau iris syndrome” to describe the appearance of the iris in a case of angle closure with deep central anterior chamber⁶,⁷. The plateau iris configuration thus results in ciliary body widening or anteropositioning, which may pull the peripheral iris towards the trabecular meshwork, with angle crowding and potential iridotrabecular contact⁶. Clinically, it can be identified by the presence of an occludable angle, flat iris and deep central anterior chamber (Figure 2). A double-hump sign appears at the indentation gonioscopy. Ultrasound biomicroscopy characteristics include anterior rotation of the ciliary body, absence of ciliary sulcus, iris angulation, flat central iris and irido-angular contact above the scleral spur⁸ (Figures 3, 4, 5) (persistence of these particular features after LI define plateau iris syndrome).

The evidence for the efficacy of ALPI in these cases has been supported by retrospective studies on small series, such as Ritch's⁹ (23 eyes of 14 subjects), which also confirmed the resolution of angle closure by UBM. At 6 years, the efficacy in 87% of cases was maintained, although with an associated pilocarpine therapy in almost half of the eyes.

A randomized clinical trial conducted in 2016 ¹° on an Asian population evaluating the 12-month results of iridoplasty in the treatment of residual apositional closure demonstrated lower effectiveness when compared to a prostaglandin analogue monotherapy. 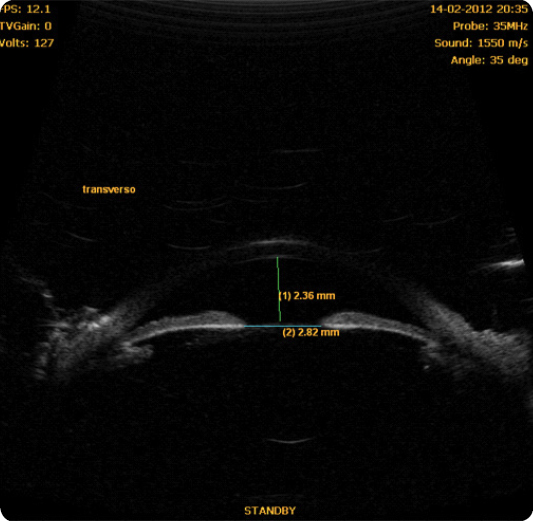 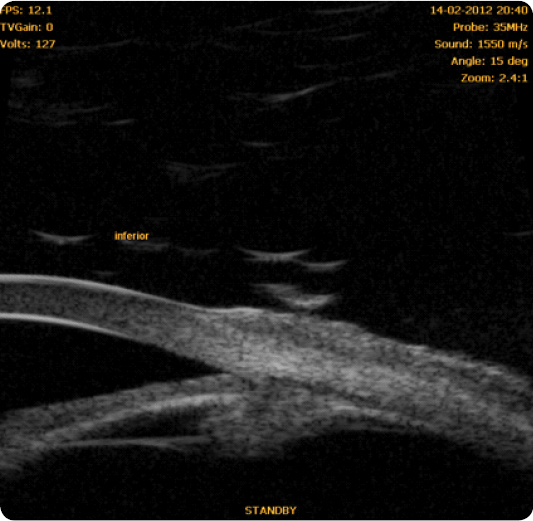 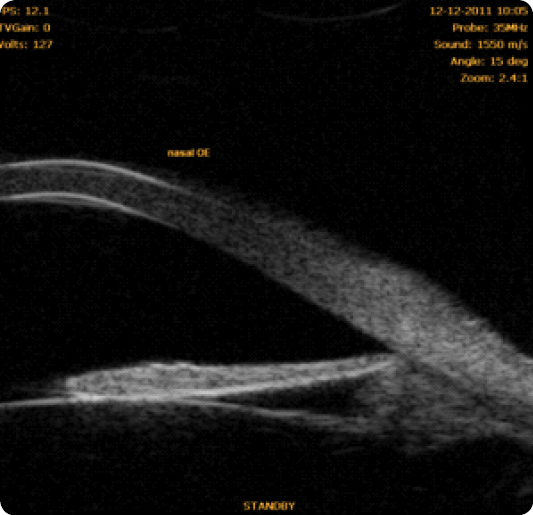 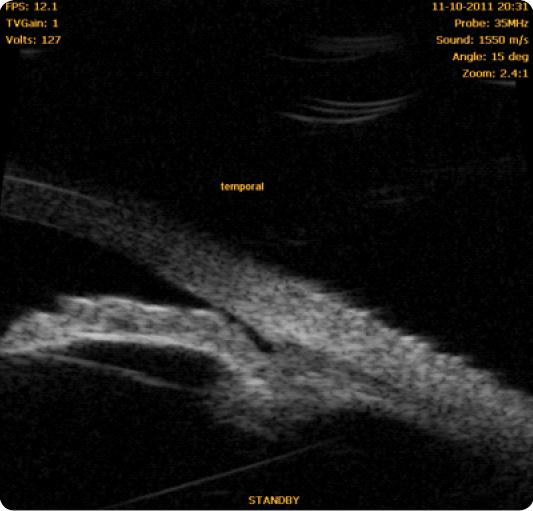 Fig. 5 Characteristic appearance of iris angulation, with flat anterior surface despite some convexity of the posterior side, in occludable angle.

The existence of cysts on the posterior iris side or on the ciliary body, especially when extensive, may mimic a plateau configuration, as well as causing angle closure (Figure 6). If their extension is large enough to increase IOP and/or anterior synechiae, treatment may be considered. Cases with a good response to ALPI have been described¹. 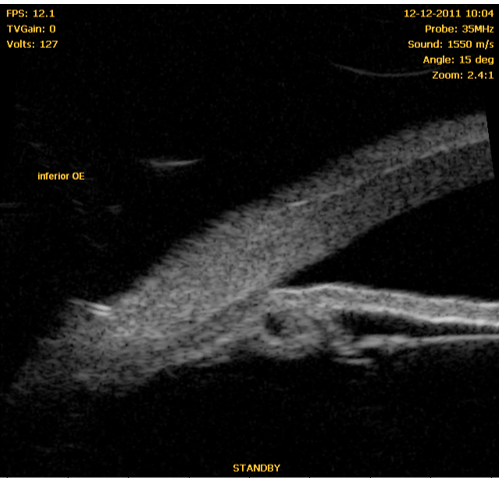 Lens intumescence or anteropositioning may cause secondary angle closure (acute or chronic) poorly responsive to LI. In such cases, ALPI may help to revert the block2,3. However, these cases seem to respond better to lens extraction ⁴. Recently, the EAGLE study¹² has shown an increased effectiveness and better quality of life of transparent lens extraction when compared to standard management (iridotomy followed by medical therapy and potential adjuvant iridoplasty) in subjects 50 years or older suffering from primary angle closure (PAC) or primary angle-closure glaucoma (PACG).

-  Obstruction posterior to the lens

- Some studies¹³ have suggested that iridoplasty may revert progressive, apositional angle closure in chronic PACG progression, thereby reducing the need for surgery. However, this effect seems to be temporary and sometimes indistinguishable from other therapies. In 2012, Azuara-Blanco et al.14 have conducted a meta-analysis study on the effectiveness of iridoplasty in chronic angle closure. Research has found only one randomized clinical trial, which has not demonstrated superiority of ALPI as an adjunct to iridotomy for IOP, number of medications and need for surgery. The authors concluded that there is no strong evidence to support the use of iridoplasty in chronic angle closure.

- As an adjuvant to laser trabeculoplasty in cases of localized angle closure (cyst or iris irregularities) in which the remaining angle is open².

-Closure of the angle at nanophthalmos after poorly effective LI³.

Severe corneal edema (unlike in LI, moderate edema is not a contraindication).

Can be found in the literature¹⁵′³

In the late 90s, there was a renewed enthusiasm about the role of peripheral iridoplasty in cases of angle closure poorly responsive to LI. Later, its interest decreased mainly due to a lack of long-term effectiveness in chronic conditions, inherent to an insufficient degree of angle opening, or presence of trabecular dysfunction¹°.

It could be used in individual cases and on a temporary basis (acute angle-closure attack, lens-related angle closure) while awaiting the definitive treatment of such conditions.