How to assess a disk haemorrhage in glaucoma?

First described by Bjerrum, the splinter haemorrhages of the optic disk were correlated with glaucoma by Drance and, for that reason, received the name of Drance haemorrhages1. Chumbley and Brubaker2 assigned them the meaning of a marker in the progressive deterioration of the visual fields.

How does then Disk Haemorrhage (DH) present itself?

Disk Haemorrhage (DH) precedes or is accompanied by a localized RNFL defect - Hoyt sign, anticipating the appearance of a wedge-shaped defect (notch) in the neuroretinal rim and subsequent alteration of the visual field. It is a predictive risk factor for glaucomatous optic neuropathy and/or visual field loss3 and it is clearly associated with visual field progression4,5,6.

In glaucoma, in which part of the disk does the haemorrhage appear?

When at the level of the excavation, they may have a more diffuse appearance. They often occur in a region of parapapillary atrophy.7 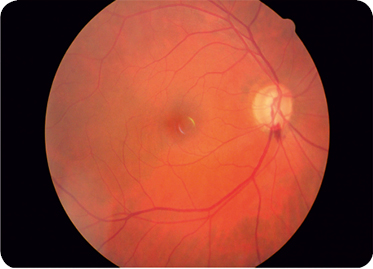 Is the haemorrhage common in advanced glaucoma?
The appearance or recurrence of haemorrhage is common at the site where the rim tissue is visible, and is exceptional in severe rim lesions7.

Can DH occur in conditions other than primary open-angle glaucoma?

Although haemorrhage occurs in 30% of glaucomas2, it may occur in other conditions, such as posterior vitreous detachment, in which the visual fields are normal (Fig. 2), venous thrombosis and diabetes, among others8.

How important is the photographic record of disk haemorrhage in patients with glaucoma?

The detection of DH increases with the frequency of the photographic documenting and time spent observing the disk. According to the OHTS3, the photographic record of the disk is six times more efficient than clinical examination in the detection of DHs. OHTS3 (Ocular Hypertension Treatment Study) and EMGT (Early Manifest Glaucoma Trial)9 studies report, respectively, the existence of 128 and 140 DHs in that documenting. 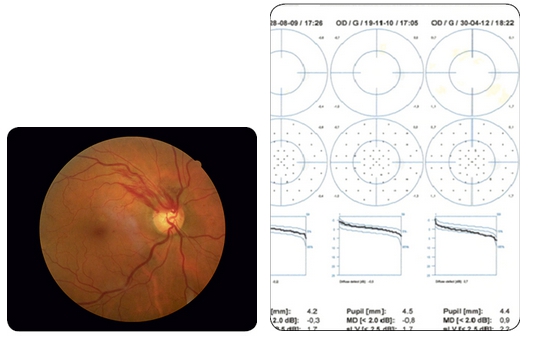 Is disk haemorrhage a cause or an effect?

It is assumed that a primary vascular event causes the haemorrhage and the subsequent disk lesion. However, the structural rim lesion can cause tissue collapse and rupture of the micro vascular complex, which will explain the existence of haemorrhages adjacent to the neuroretinal rim, notching, and recurrences near areas where there was bleeding, emphasizing this hypothesis. Recently, randomized clinical trials have assumed disk haemorrhage as a risk factor for the development and progression of glaucoma, more commonly open-angle glaucoma with normal pressure, assuming that its appearance may be associated with the biomechanical properties of the lamina cribrosa and surrounding tissues, including the binomial intraocular pressure-cerebrospinal pressure gradient, blood pressure and venous pressure10. Recent technical advances in spectral domain optical coherence tomography have produced more convincing evidence of the existence of a mechanical vascular rupture underlying the pathogenesis of disk haemorrhage in glaucoma and that DH seems to be associated with the structural and functional progression of the disease. In addition, recent findings suggest that disk haemorrhage may have different pathogenic meanings according to its location, recurrence and associated underlying mechanisms11.

Is disk haemorrhage associated with loss of the nerve fibre layer in eyes with normal optic disk configuration? 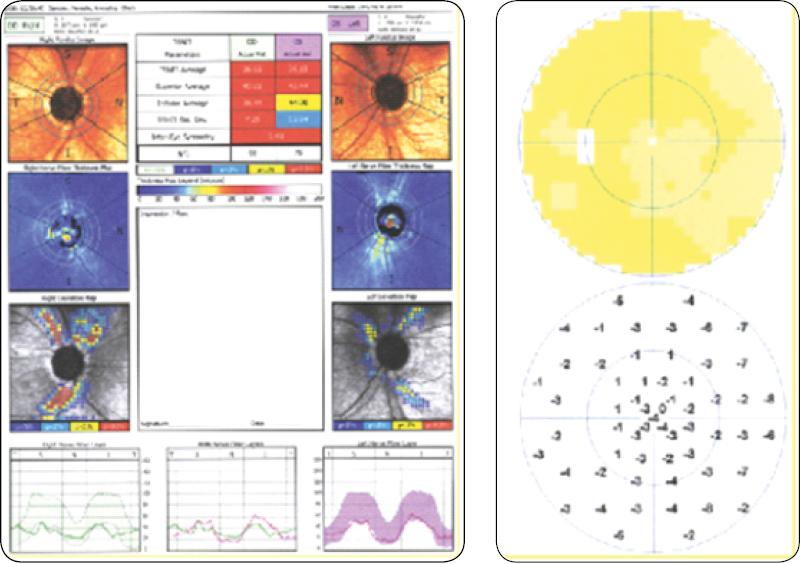 Is it possible for disk haemorrhages to recur?

Recurrence of disk haemorrhages happens 12 months from the first haemorrhage and may be bilateral. Do not confuse persistence with recurrence (DH can persist for four months)4.

What is the clinical significance of disk haemorrhage in terms of progression?

Several studies suggest a propensity for the progression of the binomial Glaucoma – Haemorrhage/Disk4,13,14. The rate of progression is reported as being higher in haemorrhages located in the inferior-temporal quadrant (63%), and may be simple, multiple and of common recurrence (Fig. 4).

Figure 4 – Deterioration of the visual field after disk haemorrhage

If there is recurrence, what is its significance and risks of progression?

In terms of perimetric progression, what is the significance of recurrent disk haemorrhages at the initial location or at different locations of the optic disk?

What type of treatment should be instituted?

In the comparison between the control and treated groups, both the OHTS and EMGT studies show that medical treatment does not alter the incidence of DH17.
In both trials, the pressure reduction may have been insufficient to delay the visual field loss when the haemorrhage develops.

What is the most appropriate type of treatment?

Non-randomized observational studies showed that eyes that underwent glaucoma filtering surgery presented a lower detection of disk haemorrhage than before surgery. The surgical procedure may reduce the rapid deterioration of the visual field after haemorrhage18.

What methodology should be used in a patient with DH, normal pachymetry and an IOP of 16 mmHg under topical therapy?

·         If DH is detected – ASSESS long-term visual fields – (PERIMETRIC BIOGRAPHY OF THE CONDITION).

·         If there is no PROGRESSION in the visual field for 10 years – The MECHANICAL EFFECT of DH will probably not cause lesions.

·         If there are signs of PROGRESSION in the visual field – change the TARGET PRESSURE value (16 mmHg will be high).

·         Valuing nocturnal systemic hypotension – The flow in the head of the optic nerve, decreased during sleep, may explain the pathogenesis of the visual field defect progression in a vulnerable optic nerve and express the final aggression in a multifactorial situation – 24h Blood Pressure Monitoring20.

·         Echo Doppler of the carotid and basilar arteries and heart valves.

A disk haemorrhage in glaucoma is a sign that alerts to the risk of progression.

Modify the monitoring/therapeutic attitude by shortening the observation times. Patients with DH and insufficient control of their pressure, even without perimetric changes (preperimetric), should be carefully monitored, as they are at high risk of progression23. Conduct visual and structural field examinations every 6 months, in parallel with careful observation of the optical disk.

Performing surgery on disk haemorrhage should be weighed (cases of rapid deterioration), as not all DH lead to progression.

Evaluate each patient in an individual context, taking into account their hemodynamic responses, phenotypic characteristics and associated risk factors.