Should ocular hypertension be monitored with OCT without perimetry?*

Glaucoma is a chronic, degenerative disease characterized by the loss of retinal ganglion cells leading to characteristic changes in the optic nerve head and the optic fiber layer. Early diagnosis and treatment are critical to prevent permanent structural injury and irreversible visual function loss.

This has been supported for a long time by studies, papers and recommendations, some of which are presented below. The paper published in 2002 in the Archives of Ophthalmology on the Ocular Hypertension Treatment Study (OHTS)1 states that changes in the optic disc are detected earlier than changes in the visual field in approximately half of the patients with ocular hypertension progressing to glaucoma. The ESAFAT2,3 (European Structure and Function Assessment Trial) concluded that when the assessment is conducted by glaucoma specialists, stereoscopic optic disc photograph accuracy is 80.5%, decreasing to 59% when matched with visual field analysis. The September 2013 monthly issue of the European Glaucoma Society was dedicated to the usefulness of measuring nerve fiber layer thickness in determining which patients with ocular hypertension will develop glaucoma: patients with ocular hypertension and moderate to severe loss of nerve fiber layer have a 7- to 8-fold higher associated risk of subsequent visual field loss. Furthermore, nerve fiber layer injuries occur in 60% of eyes with elevated eye pressure 6 years before observable changes in visual field4,5,6,7.

There is a broad consensus up to this point. However, the question to be answered is whether OCT dispenses perimetry in studying and monitoring patients with ocular hypertension. In order to respond to this question, we must know the sensitivity, the specificity and the accuracy of OCT alone in assessing the optic disc, nerve fiber layers and in measuring the ganglion cell layer-inner plexiform layer. 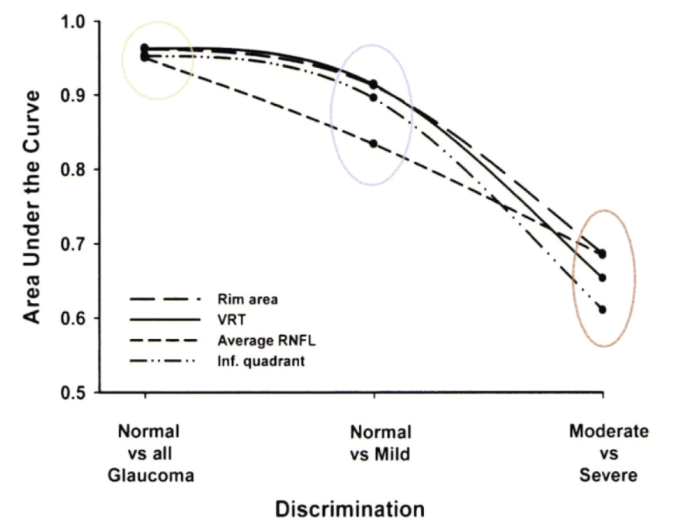 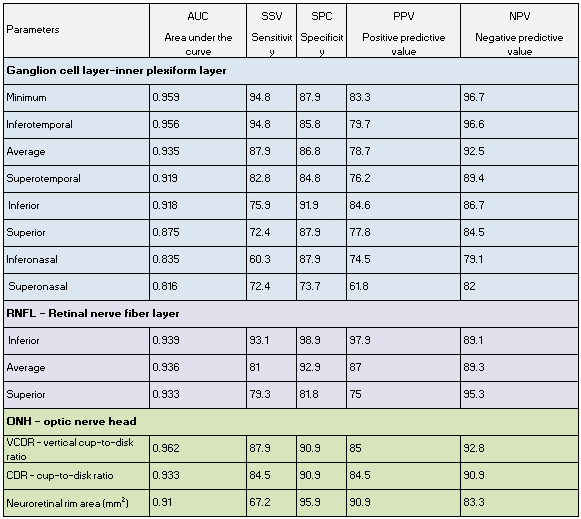 In 2011, Medeiros and co-workers11 published their work, which intended to estimate the ability to predict early development of perimetric changes by counting peripapillary ganglion cells in eyes with suspected glaucoma which showed conversion, when compared to a normal population. They have used several empirical formulas and concluded that there is an average ganglion cell loss of 28.4% before the onset of the first perimetric signs. However, they  noted a wide variability among studied eyes. 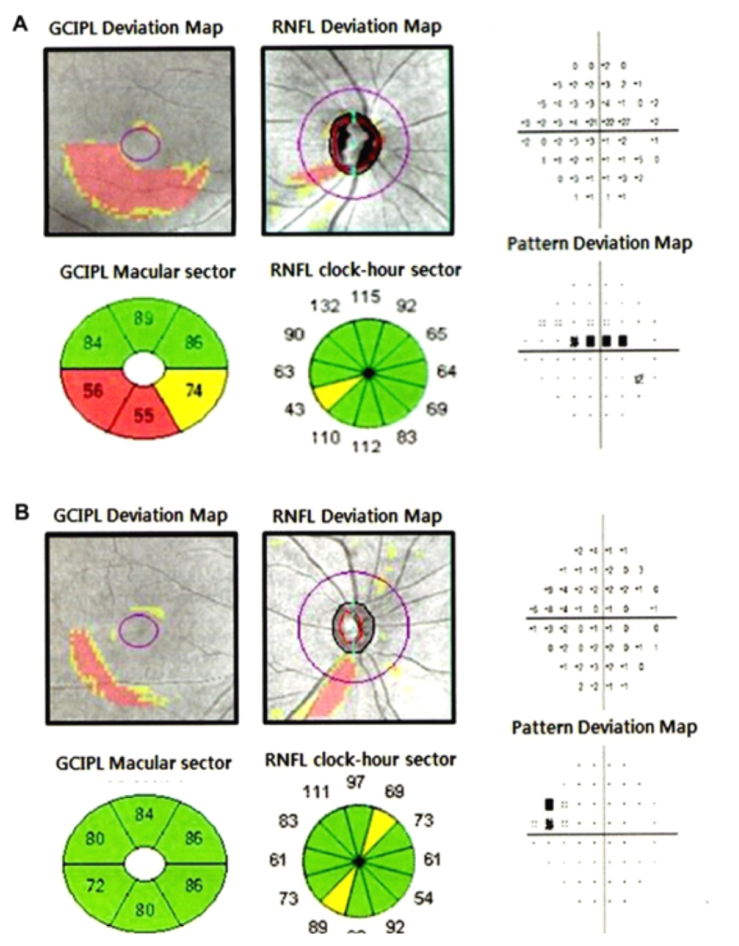 The January 2014 monthly issue of the European Glaucoma Society suggests that optic nerve head measurement accuracy is still not ideal and that such measurements require further development and optimization 13,14,15,16.

According to the studies presented, sensitivity, specificity and positive predictive value of some parameters (which are not similar for all eyes or types of initial injury) are high. However, the accuracy of assessment methods should be considered together with the issue of the different prospective study designs and population types. Regarding the varying study designs, I would like to mention the criteria used to define initial injury: sometimes, they are subjective and structural, such as photographs; others, objective and structural, but of varying types and parameters; others still, use functional criteria; and at last some studies use mixed criteria. The choice of criteria to define initial injury necessarily conditions results and conclusions. Concerning the study population, the criteria are generally so elective that they include too ideal eyes, leaving behind the wide diversity of optic disc sizes and shapes and other diseases such as common maculopathies (for instance, degenerative and diabetic) and other neuropathies. In our clinical practice, this results in lower specificity and positive predictive value, and thus in lower diagnostic performance.

In conclusion, despite the technological advances and due to the diversity of optic discs, it is hard to establish which structural parameter(s) per se are most recommended in assessing and following eyes with suspected glaucoma and glaucomatous eyes, alone and exclusively. Therefore, I believe that the approach for hypertensive, glaucomatous eyes should be based on a combination of structural and functional investigations, keeping in mind clinical history, risk factor assessment and other differential diagnoses.