Goldmann based its tonometry system on a modification of the Maklakov-Fick law, also known as the Imbert-Fick law. According to this law, an external force opposed against the surface of a sphere is equal to the pressure inside the sphere times the flattened area. The principle assumptions require the sphere to be perfectly spherical, dry, perfectly flexible and have an infinitely thin wall. Obviously, the human eye does not fulfil any of these requirements. The most important consequence of Goldmann's assumptions is that the tonometer measurements depend on central corneal thickness, causing an overestimation of IOP in thick corneas and a underestimation in thin corneas1,2,3.

Other sources of error may also create artifacts in applanation tonometry measurements:

1- Inadequate fluorescein quantity and concentration: an excessive fluorescein amount will result in thicker semicircles and therefore an overestimation of the IOP.

2- Inadequate lighting: inappropriate lighting can create measurement artefacts. This is more common in the Perkins tonometer as batteries wear out with time.

4- The pressure over the eye globe or inadequate look positioning may increase IOP values.

5- Corneal oedema causes an underestimation of IPO, even with an increased corneal thickness.

6- Other ocular characteristics, such as corneal curvature and axial longitude4.

7- The 2-mm Hg marked tonometer scale makes the examiner choose even numbers more often (hedgehog effect). This artifact also disappears in the digital version, in which the pressure value is displayed with one decimal place.

New tonometers avoid many of the limitations above of the applanation tonometry, and complement it in several scenarios in which it is important to collect information not provided by standard tonometry. The four reasons why any ophthalmologist should know the alternatives to Goldmann tonometry are explained below.

As previously mentioned, corneal thickness is one of the main sources of error in applanation tonometry, and no linear correction factor nor any formula5 has been able to compensate its effect. Studies conducted with Pascal dynamic contour tonometer (Figure 1, DCT) before and after refractive surgery have shown increased independence from corneal thickness, with values close to those obtained with intracameral manometry6,7,8,9,10. 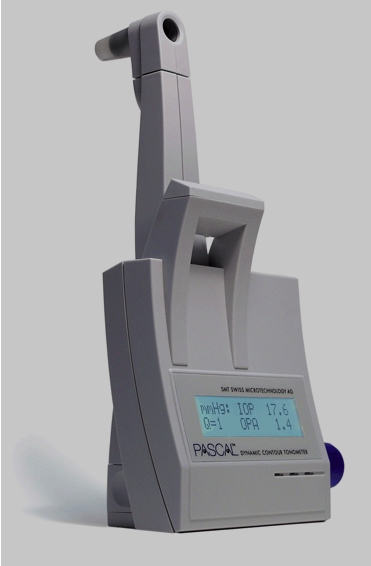 2) Some scenarios are better covered by other tonometers 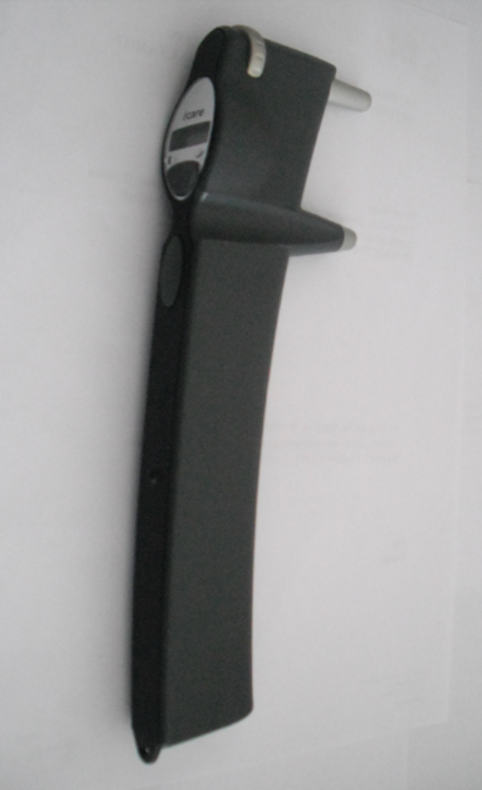 c) Tonometry in children: since it does not require anaesthetics nor fluorescein, the rebound tonometer has become a very good option to measure IOP in children, with or without congenital glaucoma11. The correlation with applanation tonometry is adequate, even though overestimation in RBT versus DCT is higher than in adults. Recent studies have shown that using rebound tonometry in children reduces the need for examinations under anaesthesia12. The new version of the rebound tonometer (Icare PRO, Figure 3) can measure the IOP with the patient in the supine position. 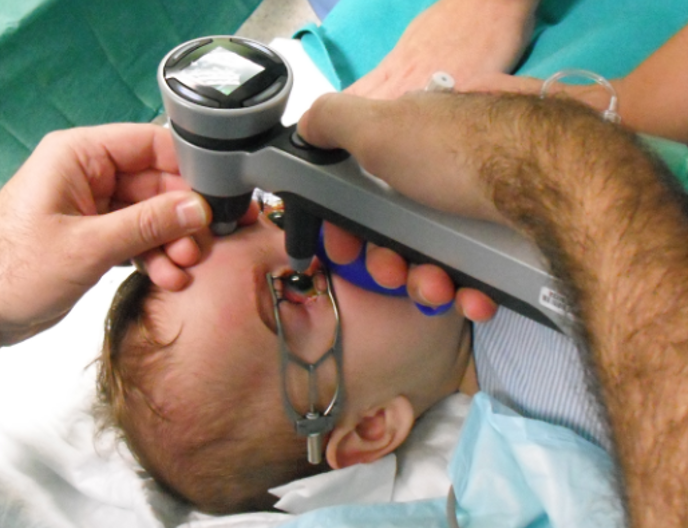 d) Measurements in irregular corneas and in immediate post-operative period of corneal surgery: tonometers with small size probes can also be an appropriate alternative in these cases, in which a frequent distortion of applanation tonometer views may preclude obtaining reliable measurements. Although the measurement is undoubtedly influenced by the multiple artifacts above for the applanation tonometer, at least a guidance measure can be obtained13.

The role of IOP fluctuations on glaucoma progression is well established. Ideally, all patients with suspected or confirmed glaucoma ought to know their 24-hour pressure profile, because although peaks usually occur first thing in the morning, there is wide variability. High direct and indirect costs of the 24-hour curves with applanation tonometry prevent this information from being obtained in a significant amount of patients.

For this purpose, sensors adapted to contact lenses, such as Sensimed Triggerfish (Figure 4) or autotonometers such as Icare One (Figure 5) or the next Icare Home can be a more efficient alternative14. 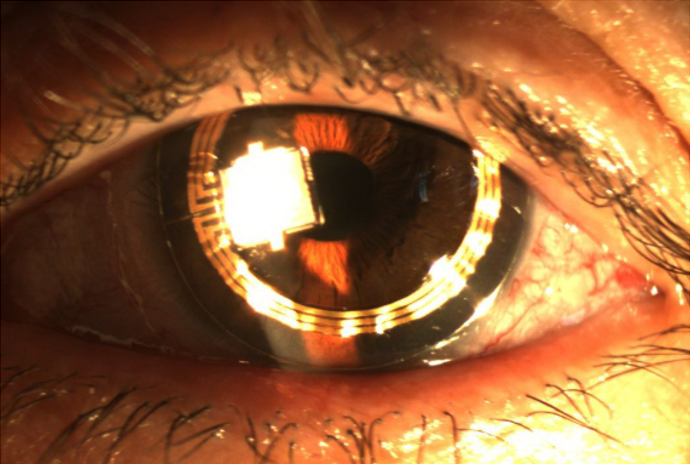 Figure 4. Biomicroscopic image of the Sensimed Triggerfish®
device fitted over the corneal surface during continuous recording
of intraocular pressure.

Figure 5. “Autotonometry” with the Icare® ONE tonometer.
The manoeuvrability of the instrument is shown
by the rate of collected results.

d) Does not provide information on corneal biomechanical characteristics

As mentioned above, applanation tonometry measurements are influenced by corneal thickness. However, neither linear correction factors nor the most complex of formulas have been able to establish a satisfactory compensation to obviate this artifact. This is possibly caused by the influence of other corneal biomechanical properties at this level. The cornea is a viscoelastic structure, so it can absorb and dissipate energy when applanated and when recovering its original shape.

The Ocular Response Analyzer (ORA, Figure 6) can measure corneal deformability using a parameter called corneal hysteresis and correct intraocular pressure according to it. At least a priori, this pressure would be less affected by corneal characteristics than pressure from standard applanation tonometers15. Corneal hysteresis has also been suggested as an independent risk factor for glaucoma progression16. 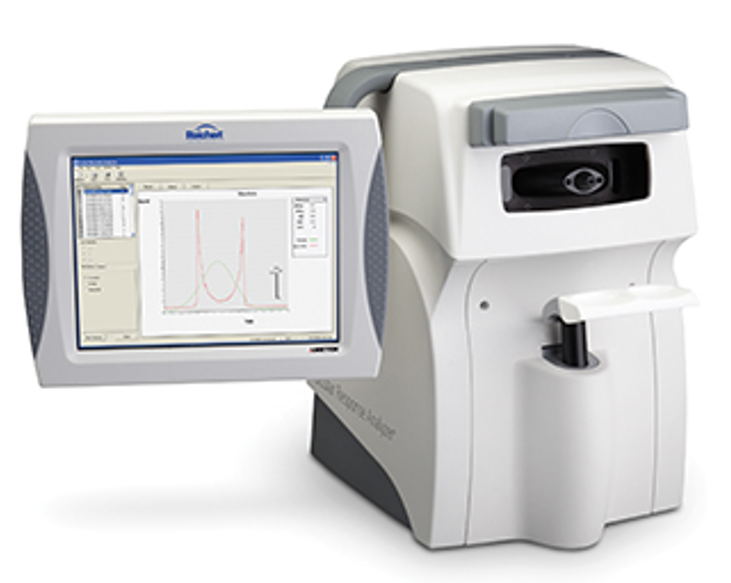 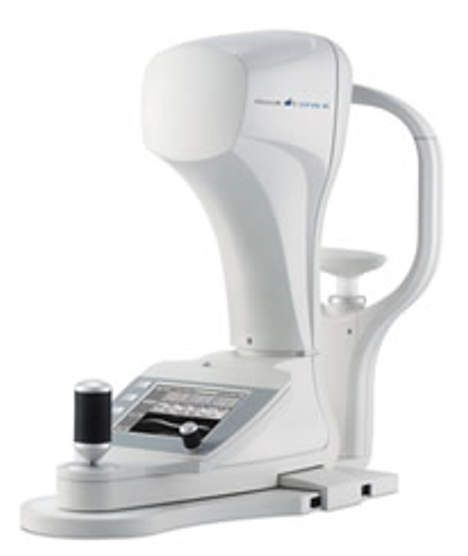