As described by the author in a text published on this platform (What is the relevance of the biodegradable collagen matrix (Ologen®) implant in trabeculectomy?), implants seem to be a safe and effective alternative to the use of antimetabolites in ab externo trabeculectomy. Their efficacy seems to be at least similar to that of MMC, with the advantage of being removed in case of hypotonia. The filtration blebs are flat, vascularized without increased risk of hypotonia, infection or bleb leak.

What is the biodegradable collagen matrix implant?

Ologen® is a flexible biodegradable collagen matrix of animal origin whose porous matrix structure (0 – 300 μm) is obtained by cross-linked lyophilized type I atelocollagen (> 90%) and glucoseaminoglycans (<10%). Due to having good immunological tolerance, it began to be used as a shaper or creator of space in filtering surgery, replacing the antimetabolites or in combination with antimetabolites at low dose. It is an absorbent implant, which does not increase the volume or pressure on the surrounding structures, but optimizes and stabilizes the injured area in order to model the connective and epithelial healing processes. Its mechanisms of action are described as the ability to maintain a barrier between the filtration bleb and the subconjunctival tissue, preventing cell migration and fibroblast formation through its porous formation and the ability to absorb the aqueous humor and prevent tissue contraction. A history of hypersensitivity to porcine collagen is a contraindication and, as with antimetabolites, no safety studies were conducted in children and pregnant women. A possible advantage over the use of antimetabolites is the fact that the filtration blebs obtained are flat, with no increased risk of hypotonia, infection or bleb leak. If there are signs of allergy or presence of hypotony maculopathy, it can be removed. It also seems to reduce the need for needling or antimetabolite injections in the postoperative period.

The indications for the use of the Ologen® implant alone or in combination with MMC at low dose in ab externo trabeculectomy are the same as for the use of antimetabolites: failure of previous filtering surgeries, congenital or juvenile glaucoma, primary glaucoma in young adults, black race, secondary glaucoma (uveitis, neovascular), conjunctival fibrosis due to chronic use of eye drops, previous eye surgery.

Surgical technique and resolution of complications

The promoters advise as a single alteration to the technique of traditional or personal trabeculectomy a conjunctival incision 3 mm from the limbus and a continuous suture of the conjunctiva (Figs. 2, 3). However, for the sake of comment, I believe it is not advisable to perform tight scleral sutures because of the impossibility of sutures lysis in the immediate postoperative period.

Fig. 2 – Incision at 3mm from the limbus and continuous suture

Fig. 3 – Incision at 3 mm from the limbus and continuous suture

The filtration blebs are flat, without encapsulations (Fig. 4).

The filtration blebs are flat, without encapsulations (Fig. 4).

Fig. 4 – Filtration blebs in the first months and after absorption of the implant

One of the side effects is the possibility of hypersensitivity or ocular surface changes in the first few weeks. Changes in the ocular surface are due to alterations in the regularity of the tear film due to the presence of the filtration bleb; the application of lubricants generally resolves the discomfort caused. In case of hypersensitivity or hypotony maculopathy, the implant should be removed. Removal of the implant should be done carefully to ensure that it is completely withdrawn. Video 2 shows the removal of an implant 15 days after surgery due to hypotony maculopathy.

A 61-year-old male with a history of megalocornea, high myopia and diagnosis of juvenile glaucoma. The patient was first submitted to right eye filtration surgery at age 31 (1987), and left eye at age 34 (1990). Cataract surgery was performed in the mid-90s. The lens of the right eye was replaced one year later by dislocation and hypertension. Before the second trabeculectomy in 2001, he performed two trabeculoplasties. In 2004 the lens of the right eye was again replaced by an iris-suspended lens and, in 2007, he suffered a lower detachment, having undergone pars plana vitrectomy. Regarding the left eye, a second and third trabeculectomy were performed in 2001 and 2007. In July 2009, a third trabeculectomy was performed on the right eye, this time with MMC and, in November 2010, a fourth trabeculectomy to the left eye using the Ologen® implant. Since then, and going back at least 7 years, the patient’s ocular pressure has been stable (right eye: 14mmHg with timolol maleate and left eye 10mmHg without therapy) and so has his perimetry (Table 1 and Figure 5). 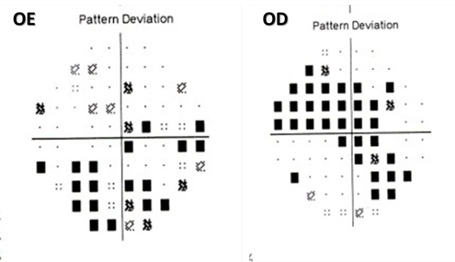 A 38-year-old female with a history of bilateral congenital cataract, operated at age 3 months. Microphthalmia, nystagmus and bilateral aphakia. Right eye submitted to trabeculectomy with iris incarceration at 10 years of age. Ocular pressure and perimetry stable up to June 2017 without medication and corrected visual acuity of 6/10. Left eye submitted to two trabeculectomies with iris incarceration in 1989 and 1991, respectively. Prof. Roger Hitchings performs third trabeculectomy using 5-FU. In 2011 intraocular pressure increased to 31mmHg with maximum therapy, and performed trabeculectomy with Ologen® implant (video 3). In 2016/17 the patient became pregnant. In June 2017, the patient had an intraocular pressure of 18mmHg with triple medication and corrected visual acuity of 2/10.

A 48-year-old female, single eye, high myopia. Background of phakic lens in 1997, 2/10 corrected visual acuity. In February 2015, the patient had a decentered anterior chamber lens, failing corneal endothelium, peripheral anterior synechiae, and intraocular pressure with quadruple medication of 28 mmHg, including oral acetazolamide. Combined surgery was performed: removal of the anterior chamber lens, cataract surgery by phacoemulsification and insertion of posterior chamber lens and trabeculectomy with Ologen® (Fig.6). After one year, the filtration bleb failed and the patient underwent a new trabeculectomy with Ologen® in June 2016. At the end of one year, the patient had a corrected visual acuity of 4/10 and an intraocular pressure of 13mmHg without medication.

The lack of randomized or non-randomized studies or case-control studies with similar populations, in terms of age, type of glaucoma, severity, type and duration of eye drops use, with the same surgical techniques, same surgeons, same follow-up periods and same criteria and methods of evaluation, lead to the difficulty of performing consistent meta-analyses and comparative evaluations in this surgical field. Similarly to what has already been described for the side effects of antimetabolites’ use, we found a discrepancy in the results of the studies and comparative analyses of patients operated with Ologen® versus antimetabolites or simple trabeculectomy with respect to efficacy and safety.

Despite this reality, I cannot fail to mention and comment on some publications.

Cilino et al1 published in 2016 a comparative, randomized study with a follow-up of 5 years of 40 eyes submitted to trabeculectomy with Ologen® or MMC. At the end of the 5 years follow-up, the Ologen group showed equal efficacy and an equal or even higher safety. The concentration of MMC used was 0.2mg/ml during 2 minutes and 6x2mm collagen implant. In the postoperative period, 0.1% dexamethasone was used for two months. Primary open-angle glaucoma and exfoliation glaucoma were included in the study, with eyes with previous surgeries or history of trauma being excluded.

In another study2, prospective, randomized and with a follow-up of 5 years, an Ologen® implant (7mmx4mm) was placed in 31 eyes and MMC (0.2mg/ml during 2 minutes) was used in 32 eyes. In the postoperative period, 0.1% dexamethasone was used for 6 weeks. In this study, Ologen® showed a complete success rate, qualified as higher than that of MMC, as well as different size and vascularization of the blebs in both groups. The postoperative complications in the two groups of studies did not differ.

The study conducted at the Zhongshan Ophthalmological Center3 concluded that the Ologen® implant and MMC in trabeculectomy have the same efficacy in the reduction of intraocular pressure, reduction of the number of medications, success rates and tolerance. However, they advise caution in interpreting the results because the clinical relevance is still limited.4

In 2015, Q Ji and colleagues compared the efficacy and safety of the Ologen® implant with the use of MMC. The article refers an equal long-term success rate with the implant, but there seems to be no advantage in avoiding the complications related to MMC4.