What is the role of vascular risk factors in glaucoma? The Flammer Syndrome and Glaucoma

In the last decades there has been a growing interest in the role of vasogenic impairment in glaucoma patients. Similarly to retina the optic nerve (ON) receives blood supply by choroidal arteries (pre-laminar region and lamina cribosa) and its superficial layer by small central retina artery branches.1

It is clear that ocular blood flow (OBF) regulation is detrimental to maintain a healthy ON. This regulation is achieved in several ways by endothelial cell layer, circulating hormones and autonomic nervous system.

Some recently published studies have demonstrated that patients with primary open angle glaucoma (POAG) seem to develop more ischemic heart disease than patients without POAG.2,3Additionally, patients with type 2 diabetes and arterial hypertension appear to have a higher risk of glaucomatous optic neuropathy (GON)4,5. This is probably related to a general continuous vascular insult that contributes to systemic blood flow impairment.

At the level of ON, due to its particular anatomical features, such as the lack of proper blood-brain barrier and the sensitivity to mechanical axonal damage by elevated IOP at the level of the lamina cribosa (a semi-rigid structure crossed by ganglion cells axons), this process could have an important impact in GON.6

The role of vascular risk factors in GON is in agreement with Blue Mountains Eye Study 7, which demonstrated that retinal arterial narrowing is a risk factor to OAG. Additionally, OCT-angiography analysis of the peripapilar choriocapillaris in POAG has also demonstrated that approximately 50% of the patients have areas of peripapilar choroidal deep-layer microvascular dropouts, with topographic correspondence to retinal nerve fiber layer defects8.This can be a primary event in GON 8, as the choriocapillaris is not directly responsible for the superficial ON tissue and so, less probable to be related to loss of the prelaminar tissue.8Although, it is necessary to consider that these findings may be only a secondary result of lower metabolic demands of the damaged axons in glaucoma.

However, it is relevant to emphasize that studies have failed to demonstrate a clear association between vascular systemic risk factors and POAG9, probably due to a chronic stable vascular insult that is somehow compensated by autoregulatory mechanisms. In patients where autoregulatory mechanisms compensate for negative changes in OBF, GON can be reduced. Normo-tensional glaucoma (NTG) is an example of the impact of continuous vascular insult in GON.6,10,11

Vascular dysregulation (VD) is the inability of the vessels to dilate or constrict in response to metabolic demands, with overperfusion, but mostly with underperfusion resulting in local damage. VD has been demonstrated to be associated with NTG, where non-dipping or over-dipper blood pressure (BP) during sleep is a well-known risk factor for GON.10 These patients tend to present more vascular related symptoms than patients with POAG, such as arterial hypotension, migraine or Raynoud phenomenon. 12,13

VD can be classified as primary (PVD) or secondary vascular dysregulation (SVD). SVD can occur secondary to neurological or inflammatory diseases such as multiple sclerosis or giant cell arteritis.10

PVD syndrome or Flammer syndrome (FS) describes a group of signs and symptoms resultant from abnormal vascular response in otherwise healthy and young people, to different supposedly normal stimulus such as cold, physical or emotional stress. 1There is an improper blood flow regulation, despite anatomically normal vessels, and it can affect any organ, including the eye. It is more prevalent in females, Asians, thin people, with more literacy and anxious personality.1The symptoms tend to appear during puberty and to weaken with aging. They include cold sensation of the extremities, low BP, reduced feeling of thirst, migraine, tinnitus, increased pain sensitivity, better smell perceptions than non-PVD patients, longer sleep onset time, low body weight, among others. 14 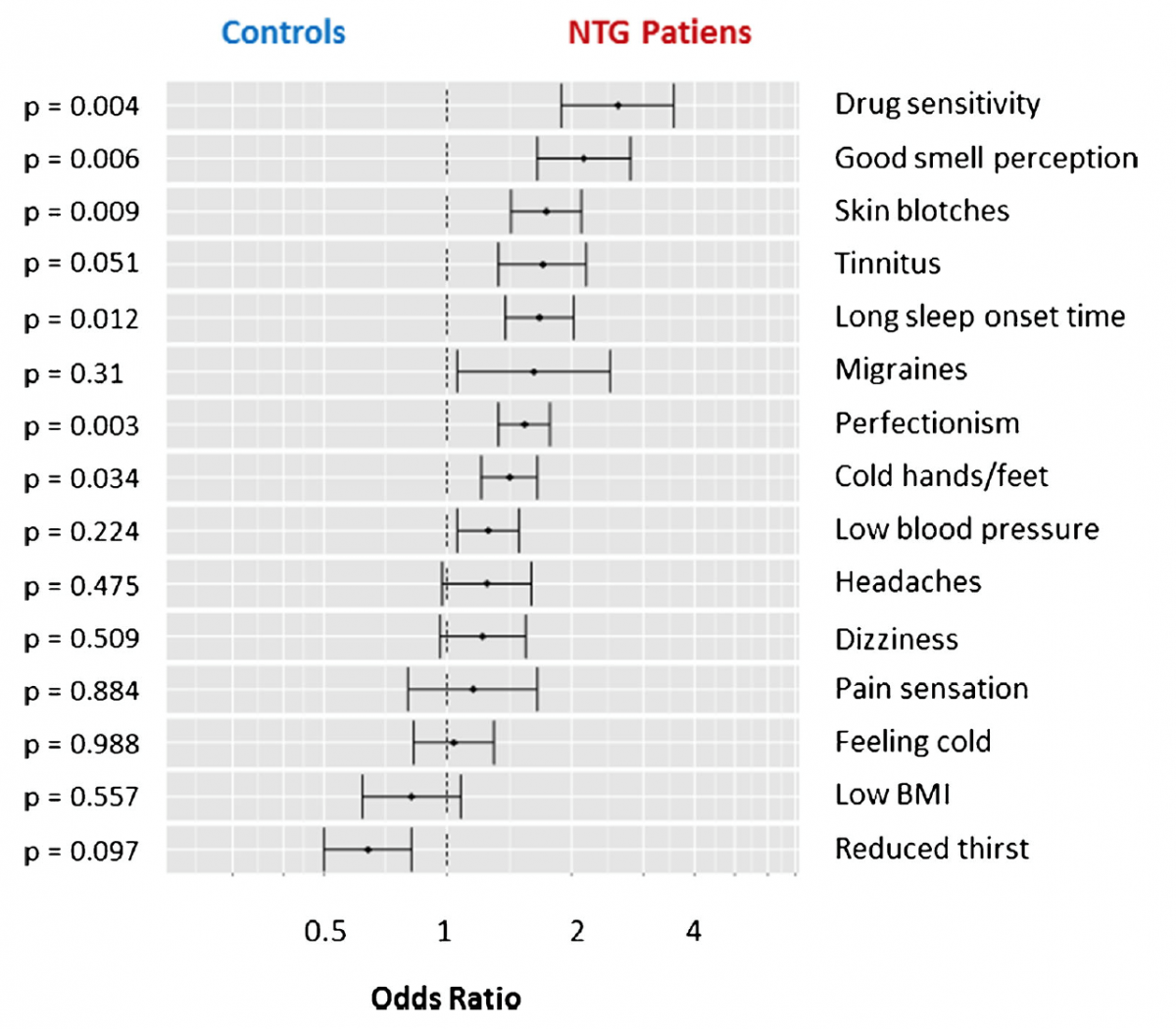 Figure 1: Adapted from Konieczka et al, 201714. Frequency of signs and symptoms of Flammer syndrome in patients with NTG, in comparison to controls.

There is no gold standard method for its diagnosis, remaining essentially clinical. Although the FS is predominantly a benign condition, it seems to predispose patients to ocular diseases such as development and progression of NTG or retinal artery and vein occlusion.11

Patients with retinitis pigmentosa and NTG report symptoms of FS more often than normal population14,15 also NTG and FS patients tend to have low systemic BP. These combined features prove that there is a common physiological substrate among these two entities.

In FS patients, fluctuations in OBF and unstable oxygen supply, specially occurs when IOP or systemic BP fluctuates and are due to several factors like vasospasm, endothelial dysfunction (a key regulator of blood flow in micro- and macro vascular beds), and oxidative stress.6

It has been hypothesized that there is a primary endothelium dysfunction, with an imbalance between endothelin-1 (ET1) and nitric oxide production reducing OBF. 6 Additionally, vascular autoregulation impairment is responsible for instability perfusion of the ON, with transitory ischemic changes and mild reperfusion injuries, that will lead to oxidative stress and ET1 increased production at a local level. 6 This vasoactive substance activates ET receptors in smooth-muscle cells or pericytes, which in turn increases cytoplasmic calcium, inducing vessels constriction that affects ON circulation due to the lack of proper capillary blood-barrier.16 The increase of ET1 has a mutifactorial origin in FS and his level has also shown to be increased in patients with NTG. 17 Chronic oxidative stress is also responsible for upregulation of metalloproteinases (MMP-9), damage to ganglion cells mitochondria with impairment of energy supply and glial cell activation, such as astrocyte.1 Altogether, these changes induce an alteration in ON microenvironment and surroundings that is responsible for axonal damage.

These vascular abnormalities probably affect more patients with NTG, making it necessary to look for other therapies non-IOP dependent, that despite crucial in the control of other types of glaucoma might have modest benefits in this case.

Lifestyle modification with eviction of trigger factors such as major emotional stress and cold, smoking cessation and increases salt intake, may improve systemic symptoms, although its impact in ON perfusion is unknown.18

Endothelial function has been shown to improve with physical exercise and flavonoid supplementation (such as tea or wine, due to their polyphenols antioxidant properties). 18

There are some reports of Ginkgo biloba supplementation in reducing oxidative stress, increasing OBF and improving visual field defects in NTG patients.19

The reduction of systemic hypotension with salt intake and prevention of nocturnal over-dipping can be an important measure to stop progression of visual field damage in NTG patients.20

There is little evidence of pharmacological vascular regulation in the scientific literature.

Low doses of calcium-channel blockers can reduce the effect of ET-1 and improve vasoconstriction. However, care must be taken with the dosage to avoid further decrease in BP.15

Fixed combination of topical timolol/dorzolamide appears to enhance OBF on the ON. 21,22

In conclusion, FS represents a primary vascular dysfunction, where dysregulation of the vascular tone is the central feature and it is a risk factor for glaucoma development and progression.

Further investigation is needed to find additional measures that allow stabilization of OBF in order to improve NTG treatment.