What is the current importance of the algorithms that evaluate macular thickness?

Macular OCT is important for the early diagnosis of glaucoma and for the progression of this disease due to the special characteristics of the macular region:

- In its 5 mm / 16 degrees central area are located more than 50% of the cell bodies of retinal ganglion cells (GCL ganglion cell layer), with the thickness of about 6 layers;1
- The cell bodies of GCL in conjunction with their axons from the nerve fiber layer (NFL) represent about 30% of the total thickness of the retina;2
- OCT evaluation of the GCC Complex: GCL + NFL + IPL (inner plexiform layer) is already possible with most Spectral-Domain (SD) OCT devices.
The Ganglion Cell Complex (GCC) measures the thickness of the 3 innermost layers of the retina that are preferentially affected in glaucoma.

With minimum acquisition times (1 sec) and a remarkable resolution power (5 μm)3, the new SD-OCT devices make it possible to detect decreases in the GCC complex and an earlier diagnosis of glaucoma (Fig. 1).

However, there are currently around a dozen SD-OCT manufacturers and each instrument segments the GCC complex differently, which makes it impossible to compare the exams performed in different devices and, consequently, to interpolate the data. In fact, not only does the area of macular scans vary between 6 mm2 with Cirrus and 9 mm2 with Nidek, but there is also a different definition of the GCC complex among manufacturers: while most manufacturers consider the GCC defined above (GCL+IPL+NFL), Carl Zeiss Meditec only uses Cirrus GCL+IPL and leaves out NFL, while Topcon gives you three different maps with various combinations of GCL/IPL/NFL. By using always the same OCT, the measurement of the total macular thickness is highly reproducible intra- and inter-examinations, having coefficients of variability below 1%.4 In the absence of any other macular pathology, the reduction of the total macular thickness is highly discriminatory.5 This measurement between the internal limiting membrane and the retinal pigment epithelium is very accurate due to the optical property of reflectance of these structures.6

The layers resulting from the segmentation also show a high reproducibility, with a high correlation between the NFL, the Visual Fields and the macular thickness.7,8 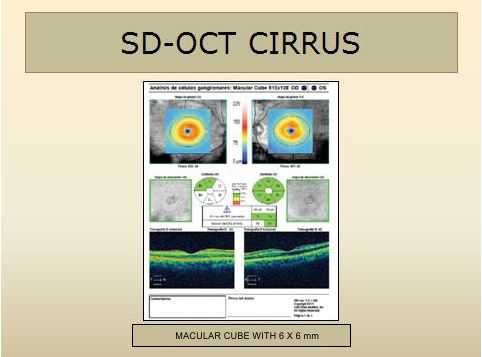 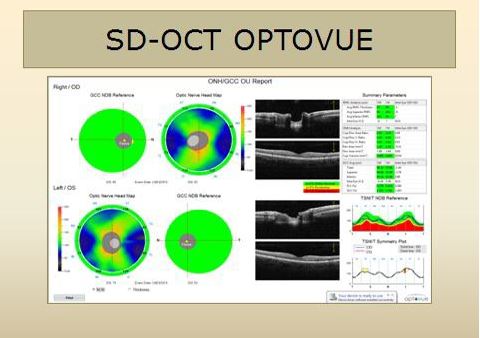 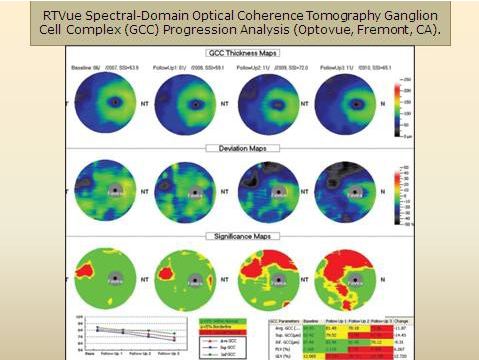 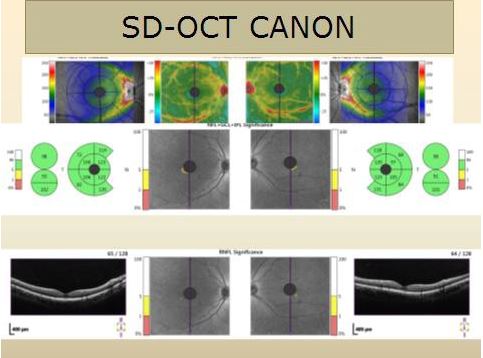 SPECTRALIS is the SD-OCT from Heidelberg. It uses the APS, Anatomical Positioning System, with two fixed anatomical landmarks, the fovea and the center of the Bruch’s membrane opening, to automatically position the OCT scans. The analysis of the macular thickness (Fig. 6) is done by evaluating the symmetry on the fovea-disc axis between the maculae of the two eyes. It automatically displays the total thickness of the retina, as well as the GCC (by segmentation), in 8 x 8 squares of 3º each, in the central 24º, and automatically analyzes the respective asymmetries between the upper and lower hemispheres of each macula. A normative basis is currently under preparation.9 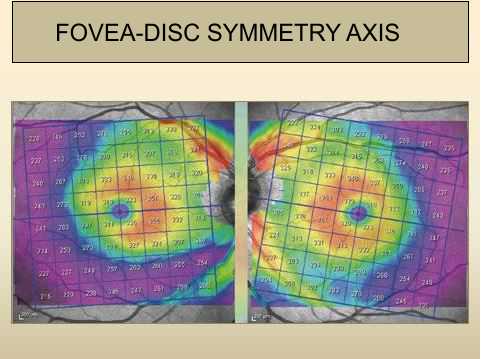 The usual presence of fovea-disc symmetry between the two eyes in a normal individual does not occur in a patient with glaucoma.10,11 Consequently, if this symmetry is not found in a patient, it is possible to improve the diagnosis as well as the progression of the disease (Fig.7).12,13,14 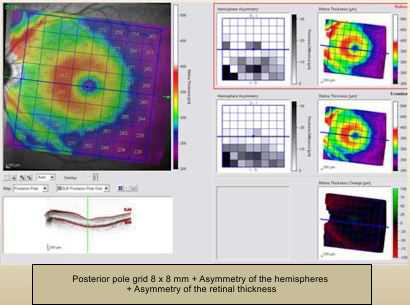 The ideal would be to integrate structure and function in the same patient, as if it were a puzzle, and, when comparing the visual field examinations with the SD-OCT exams of the optical disks and the maculae, we may treat as suspicious the discrepancies found and reinforce the detection of defects, corroborating them12,15.

The use of these algorithms in macular pathology is limited to the glaucoma etiology16.