Is gonioscopy still a fundamental test in the evaluation of glaucoma?

The angle between the posterior surface of the cornea and the anterior surface of the iris constitutes the anterior chamber (AC) angle It was first visualized in 1907 by Trantas by indentation of the limbus in a case of keratoglobus, but only in 1914 did Salzmann describe the first gonioscopy lens, which has undergone modifications over the years until the introduction in 1968 by Goldmann of the gonioprism we use today.

The classification of the ACangle was first suggested by Barkan in 1938.

According to its amplitude, glaucoma can be classified into two groups: open angle or closed angle.1

Aqueous humour (AH) drainage is done through the trabecular fibrillar structure and the lumen of the Schlemm’s canal that occupy the vertex of the ACangle.

Access of AH to these structures may be limited in different situations, resulting in an increase of intraocular pressure (IOP), which may be abrupt or insidious.

The eyes most susceptible to abrupt elevations of IOP are those that are anatomically smaller, usually hyperopic, in which the structures are closer and generally showing an anterior deviation, creating conditions for angular blockade 2,3,4,5.

The gonioscopy is the analysis of the anterior chamber (AC) angle.

It allows us to evaluate the amplitude of the angle (if it is open or closed and, in this case, if transiently or definitively) and the level of the iris insertion and its peripheral configuration, and to visualize other images such as synechiae, pigmentation, vascularization, dysgenesis (Fig. 1). 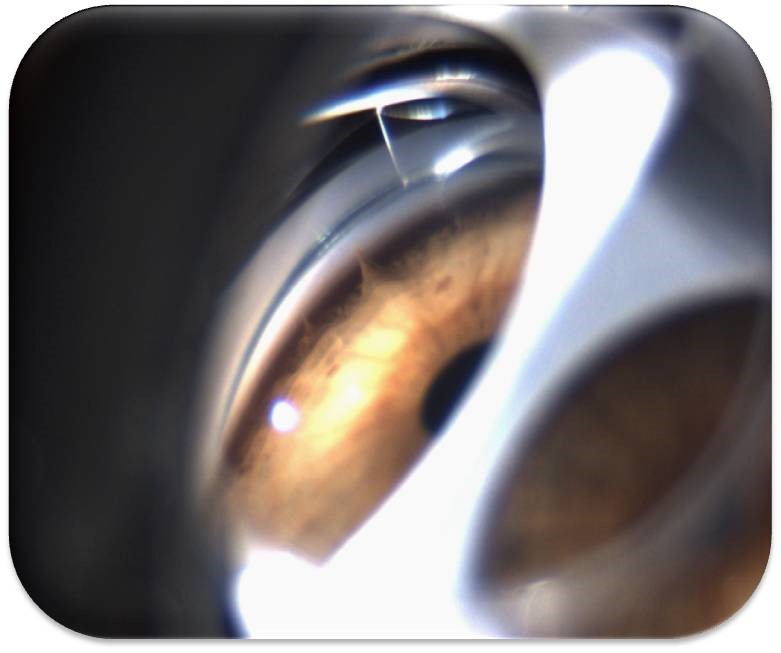 From this visualization depends the diagnosis of the type of glaucoma present and, consequently, the therapeutic action to be adopted.

How it is done

In daily practice, this test uses a slit lamp and a lens which allows direct visualization of the angle as Koeppe’s lens  or indirect visualization , such as the one or three-mirrored Goldmann lens or the four- mirrored Zeiss lens, with a slightly smaller diameter than the cornea, allowing indentation or dynamic gonioscopy6,7 (Fig. 2). 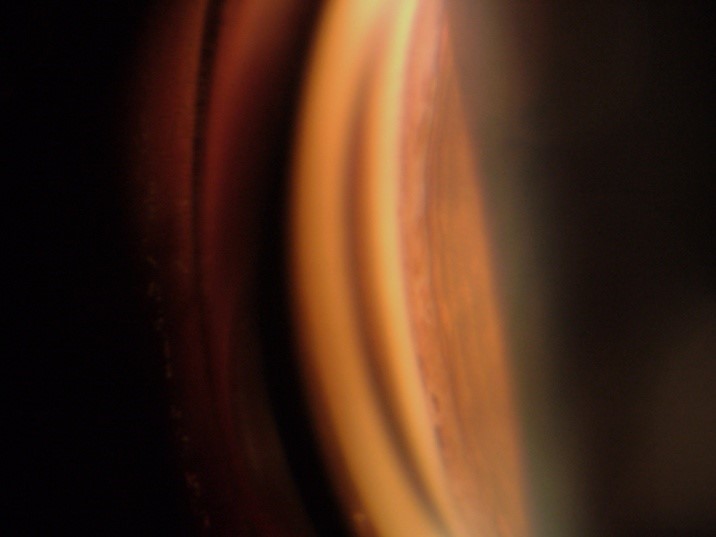 Figure 2 – Viewing of the AC angle

There are several classifications for the angle aperture, such as the Shaffer system, which takes into account the angle formed by the inner portion of the trabecular meshwork and the anterior face of the iris. Thus, according to the number of structures visualized:

Nowadays, Spaeth’s gonioscopy is the most advised since it is more detailed, as it studies not only the angular aperture but also the insertion of the iris root (if it is anterior to the Schwalbe’s line, scleral spur or ciliary body band) and its peripheral configuration (convex, regular or concave) during compression of the dynamic gonioscopy.

B: Trabecular pigmentation is physiologically moderate, but may vary with age and race. It is increased in the Pigment Dispersion Syndrome (Fig. 3), Pseudoexfoliative Syndrome, and in inflammatory or tumour processes. 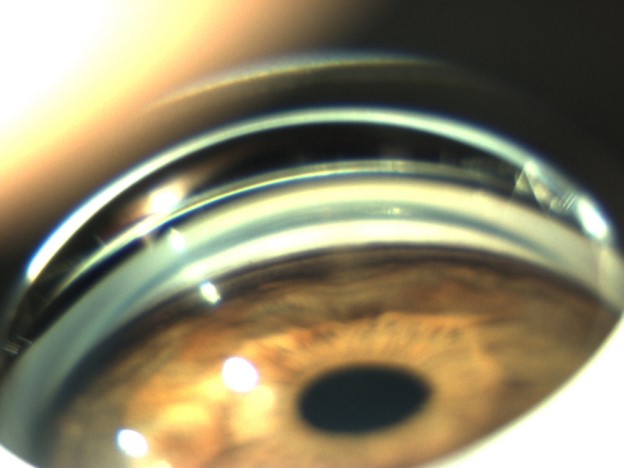 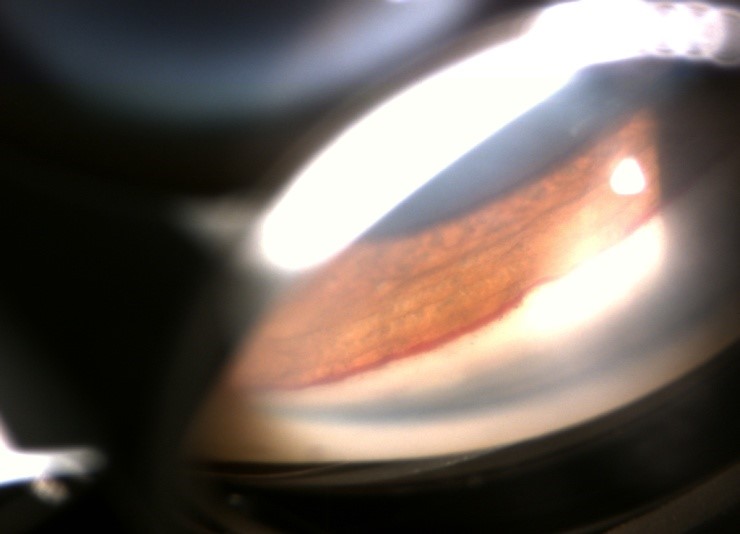 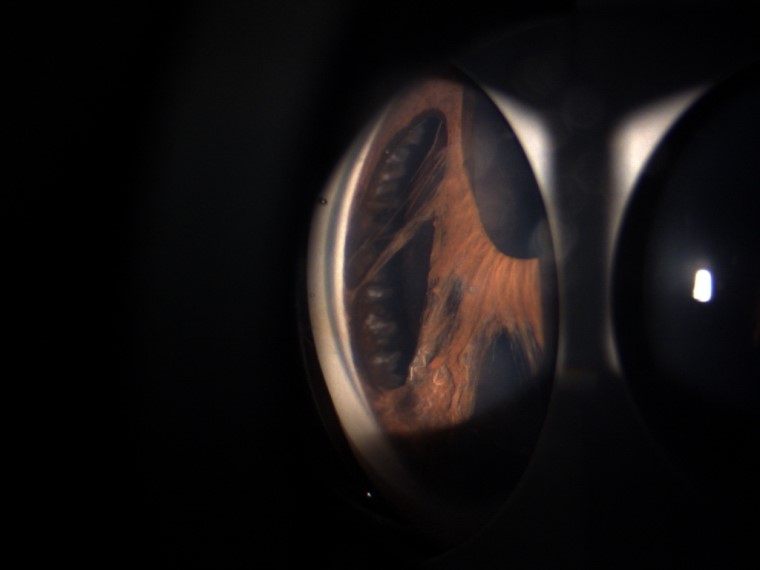 D: The evaluation of the level of iris insertion4 allows us to distinguish between apparent and real. The root of the iris, which is normally inserted into the anterior aspect of the ciliary body at the level of the ciliary band, in cases of narrow angle may be inserted at the level of the spur or even slightly behind Schwalbe’s line. It is usually discreetly convex but may vary between concave (myopia), localized convex (posterior iris tumour or cyst) (Fig. 6) or flat, as in the case of plateau iris where the AC is deep in the centre, the iris is flat but makes an abrupt angle in the periphery towards the apex of the angle, which is narrow or even closed. 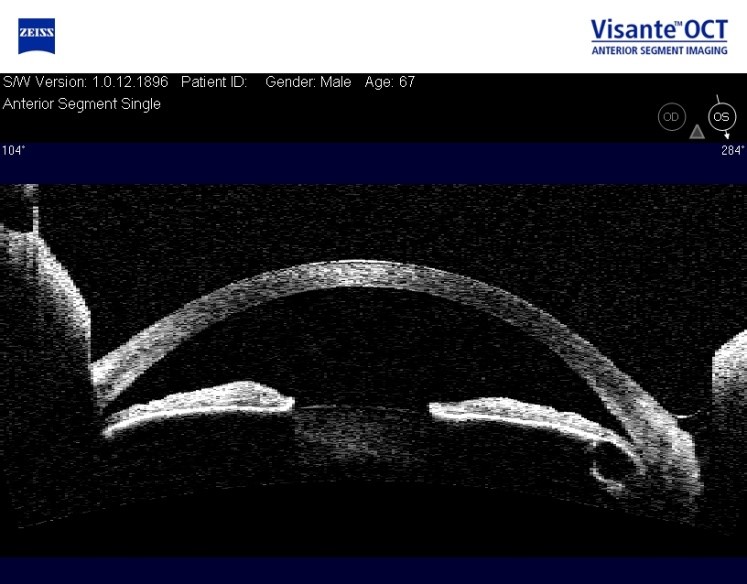 Dynamic gonioscopy plays an important role in the evaluation of the angle because it allows us to define the actual level of insertion of the iris2.

It consists in the compression of the cornea by a gonioscopy lens with a slightly smaller diameter than the cornea. The aqueous humour is compressed towards the periphery, leading to a widening of the amplitude of the angle by pushing the iris in cases of simple iridotrabecular apposition. In pathological situations, as in the case of anterior peripheral synechiae, this phenomenon does not occur.

Returning to the initial question and considering the amount of information that can be obtained with the gonioscopy, the relevance of these data for the final diagnosis and the importance of the latter for the establishment of the correct therapy, we can only conclude that the practice of gonioscopy should be a mandatory part of the evaluation of the patient suspected to have glaucoma or already diagnosed.