The filtering bleb aspects found at the slit lamp may not always correspond to the expected intraocular pressure surgery outcome. Bleb features found in UBM and AS-OCT cross sectional images can help in the investigation and provide clues on the reasons behind those results to guide the best management strategy.1 We will explain the main imaging characteristics associated with functional filtering blebs and its correlation with aspects found in the confocal microscopy; how anterior segment imaging demonstrates the efficacy of laser procedures onto the iris; the importance of these technologies in the pre and post operative care in glaucoma surgery using anterior with posterior drainage devices; the aspects related to minimal invasive glaucoma surgery and the clinical application in cycloplastia.

UBM and AS-OCT substantially complement optical biomicroscopy in filtering glaucoma surgery post-operative assessment. Yamamoto has proposed a system of classification correlating the filtering bleb’s ultrasound characteristics and the surgery success. The internal echostructure of the filtering bleb and the presence of an intrascleral route have shown good correlation with intraocular pressure control (type L bleb).2 Table 1

Table 2. Characteristics of the filtering bleb according to Labbé et al. based on AS-OCT imaging and correlation with in vivo confocal microscopy. Diffuse and cystic blebs showed the best intraocular pressure control 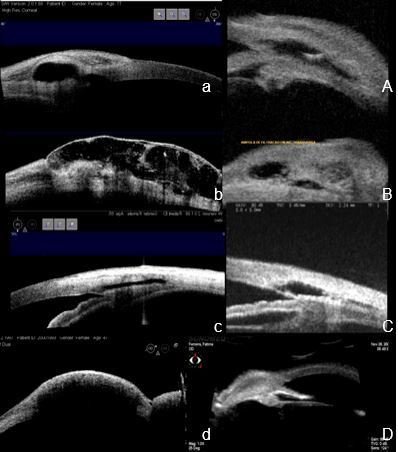 The correlation between in vivo confocal microscopy findings and the AS-OCT filtering bleb reflectivity with the filtering glaucoma surgery outcomes has suggested that lower reflective and heterogeneous suprascleral tissue match with loose connective tissue, where gaps and high fluid content abound, thus documenting a functional bleb.5

UBM and AS-OCT can also assess several other glaucoma filtering surgery-related aspects, such as the: 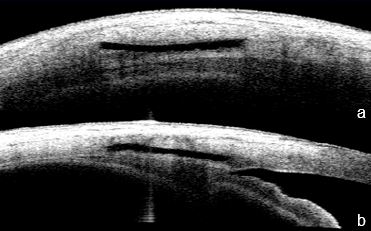 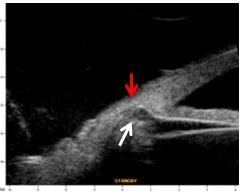 The effect of laser treatment on ACA morphology can be followed up utilizing both UBM and the AS-OCT technologies. The high resolution cross section images they provide can clarify if a laser periphery iridotomy is completely permeable or not (Fig.3) and if the outcome of the former (Fig.3 An argon laser peripheral iridoplasty can be indicated before an acute attack of angle closure glaucoma, recurrent apposicional closure despite a patent iridotomy and the impossibility of creating a laser iridotomy because of hazy media. The effect of the procedure on the amplitude of the anterior chamber angle can be acknowledged by UBM or AS-OCT.6 (Fig.4 and Fig 5)

UBM and AS-OCT can inform about the patency, route and relation of aqueous drainage devices with neighboring structures.  Especially UBM can have a relevant role while planning this type of glaucoma surgery by allowing to assess the irido-ciliary sulcus and the anterior chamber angle to decide where to best place the proximal end of the valve tube. Fig.6 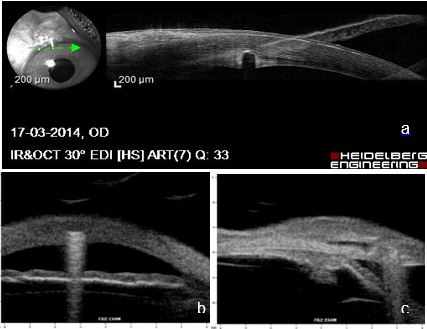 The Minimal Invasive Glaucoma Surgery (MIGS) has been evolving associated to several devices such as the XEN Gel Stent® (AqueSys, Wisconsin Implant). This non-inflammatory soft, collagen-derived, permanent implant is injected ab interno to create an aqueous humor outflow path from the anterior chamber to the subconjunctival space.7,8,9,10,11 Figures 8 and 9 illustrate a case with good intraocular pressure control after the implantation of a XenGel Stent. 12

Fig. 8 a. Phakic eye (axial section) and b. (longitudinal section) showing a linear patent pathway (yellow arrow) through the sclera progressing towards the subconjunctival space. UBM

Fig 9. The same eye illustrated in Fig 23. a. Longitudinal and b. Cross-sectional views of the patent pathway and the diffuse filtering bleb generated by the device. AS-OCT 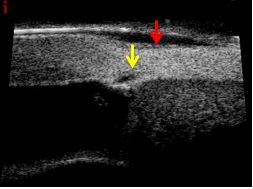 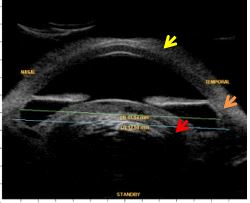 Both AS-OCT and UBM have shown to be useful in the post-operative assessment of glaucoma clarifying unexpected and unsuccessful outcomes and explaining the reason for the successful ones.  AS-OCT provide very informative cross sectional images of the anterior segment anterior to da iris plane and of the eye wall, thus avoiding a contact examination to evaluate postoperative outcomes of filtering glaucoma surgery, of iris laser and surgery complications unrelated with the ciliary body.

Dra. Manuela Carvalho, for her insurmountable encouragement and friendship

All Colleagues and Friends for having entrusted their Patients, whose corresponding images illustrate this paper.